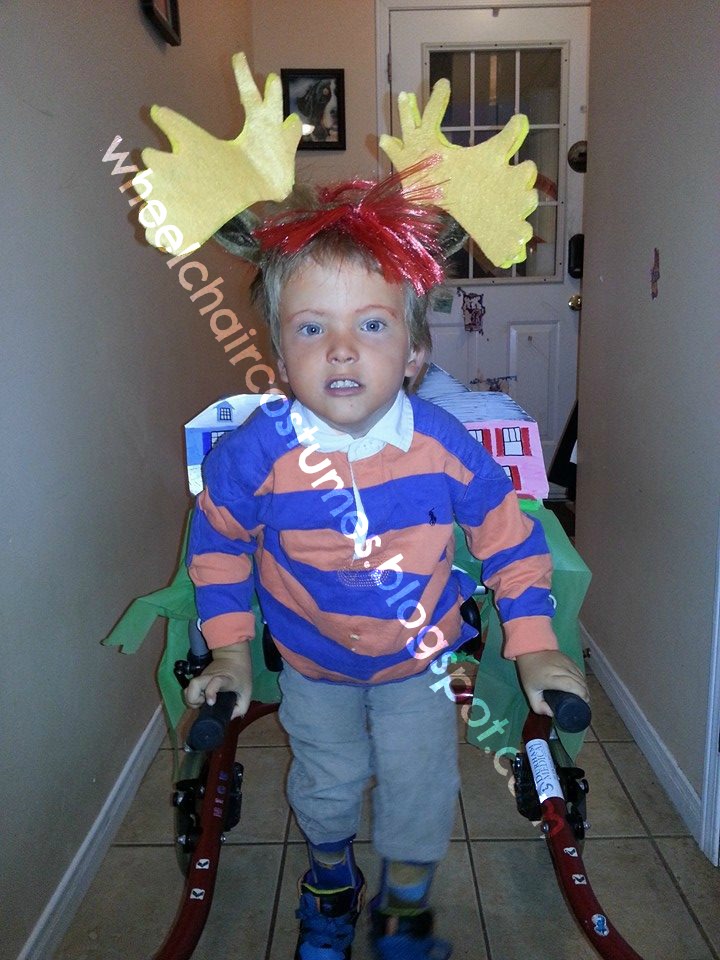 Assembly:
My son’s favorite thing was the Backyardigans t.v show. His favorite character was Tyrone. Each Backyardigan character lives in their own house (with their own colour) and they all meet every day in the backyard. So we decided to surround my son in his ‘backyard’ with the houses around him. This turned into a much more ‘crafty’ project than I had originally anticipated, but he was very happy with the result (and the houses are used afterwards to play with.

Living in Canada the costume had to be able to withstand rain (and it did). Everything was made with plastic or foam. The houses were held in place with poscipcles sticks along the back (like an L brace) and then glued into a green foam square. 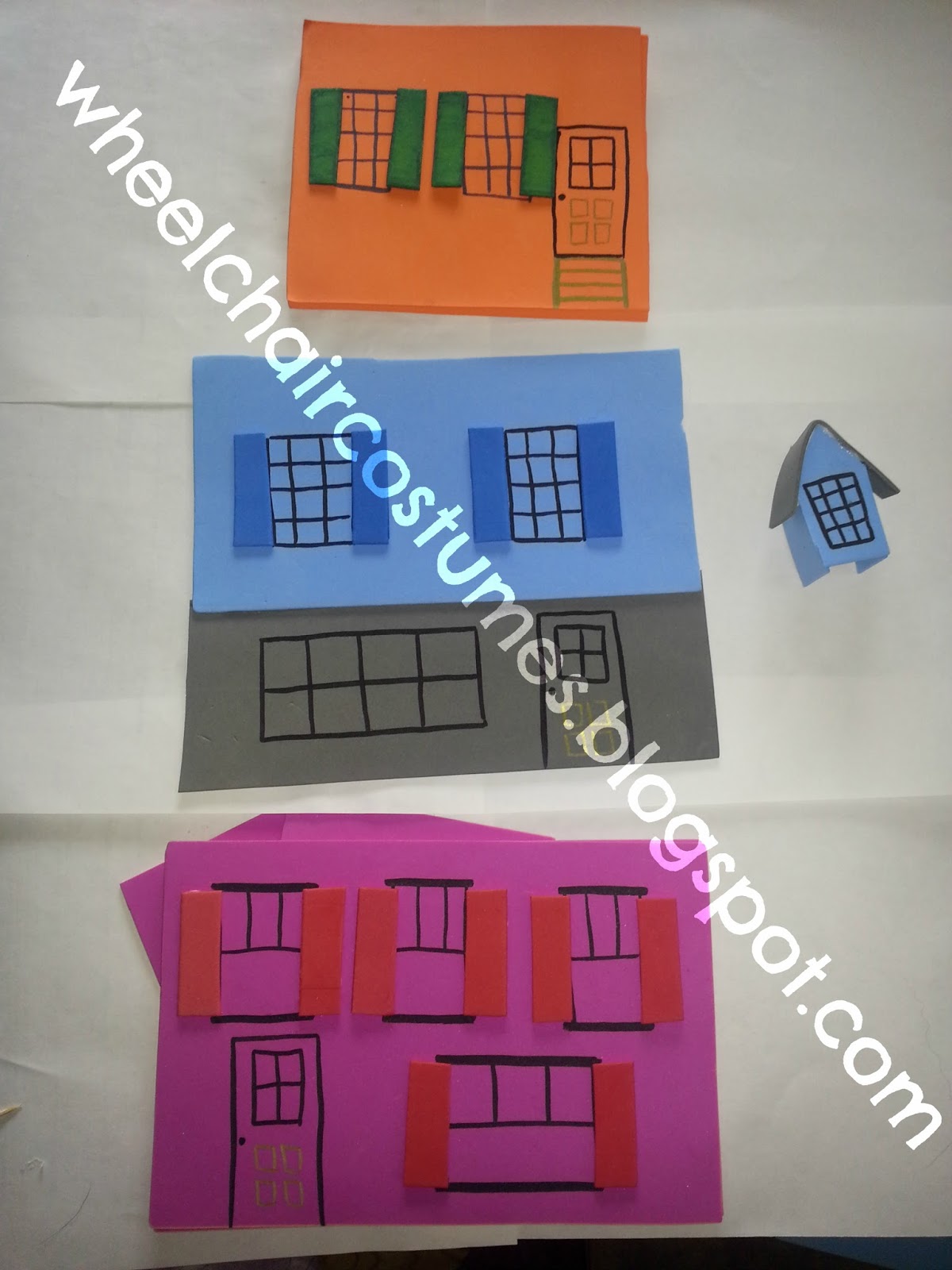 I used the foam glue to hold it all together. I was worried about the holt glue gun (and I don’t think I could find it). The roof sat on the bottom of the house and just folded over. I got extra long pieces of the black and grey. I used tape and glue on the back to keep it in place. The doors and windows and shutters all glued directly on, and the stairs are 3 layers of foam to make steps. 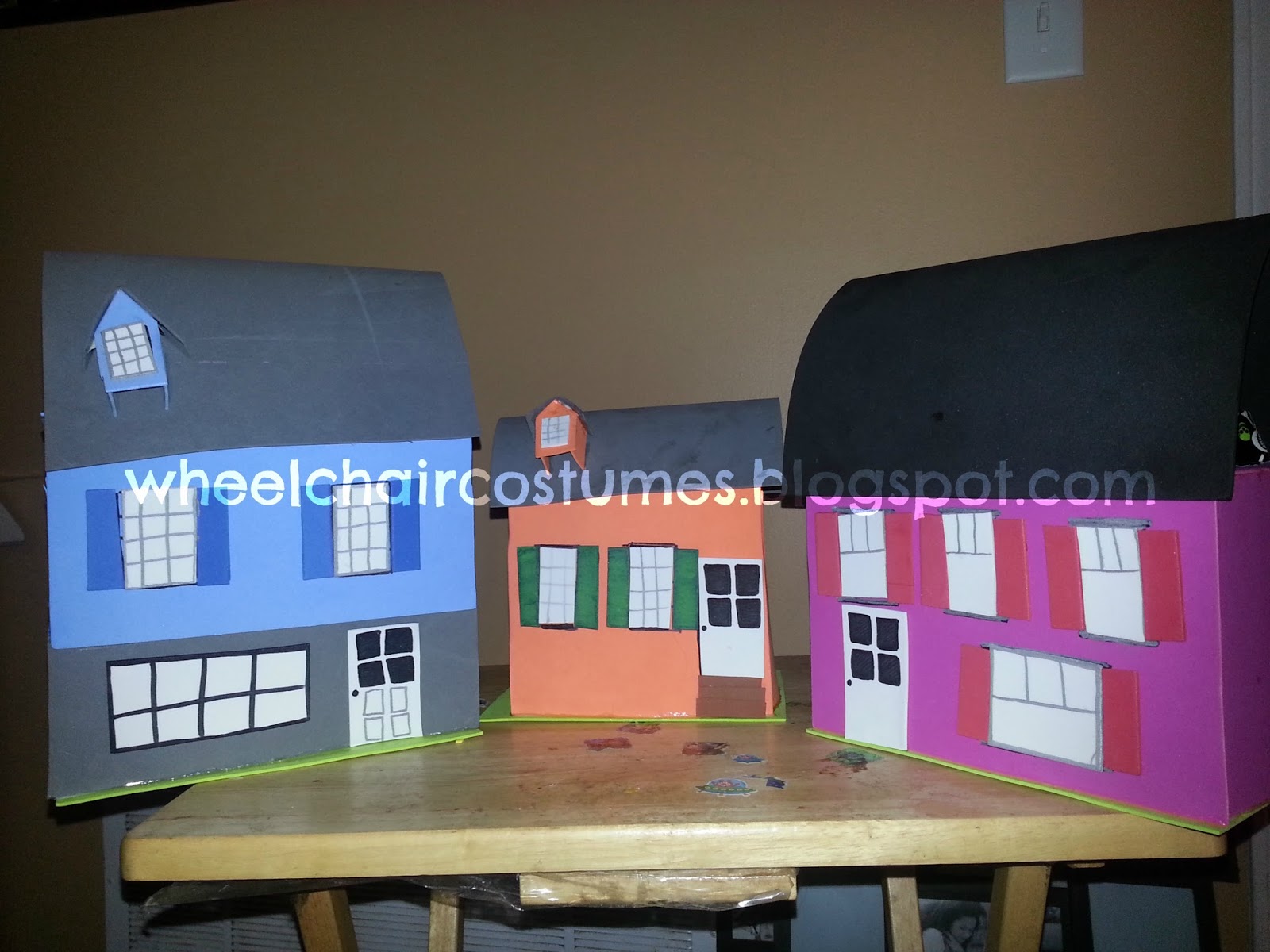 The three houses were mounted on a heavy cardboard board. A hole was cut into the cardboard so that it fit around the wheelchair and fit into the handle bars. The blue and pink houses sat on either side of my son in his wheelchair and the orange one was between the handle bars behind him. Everything was covered in a green plastic table cloth. It tilted so that my son came up between the houses. 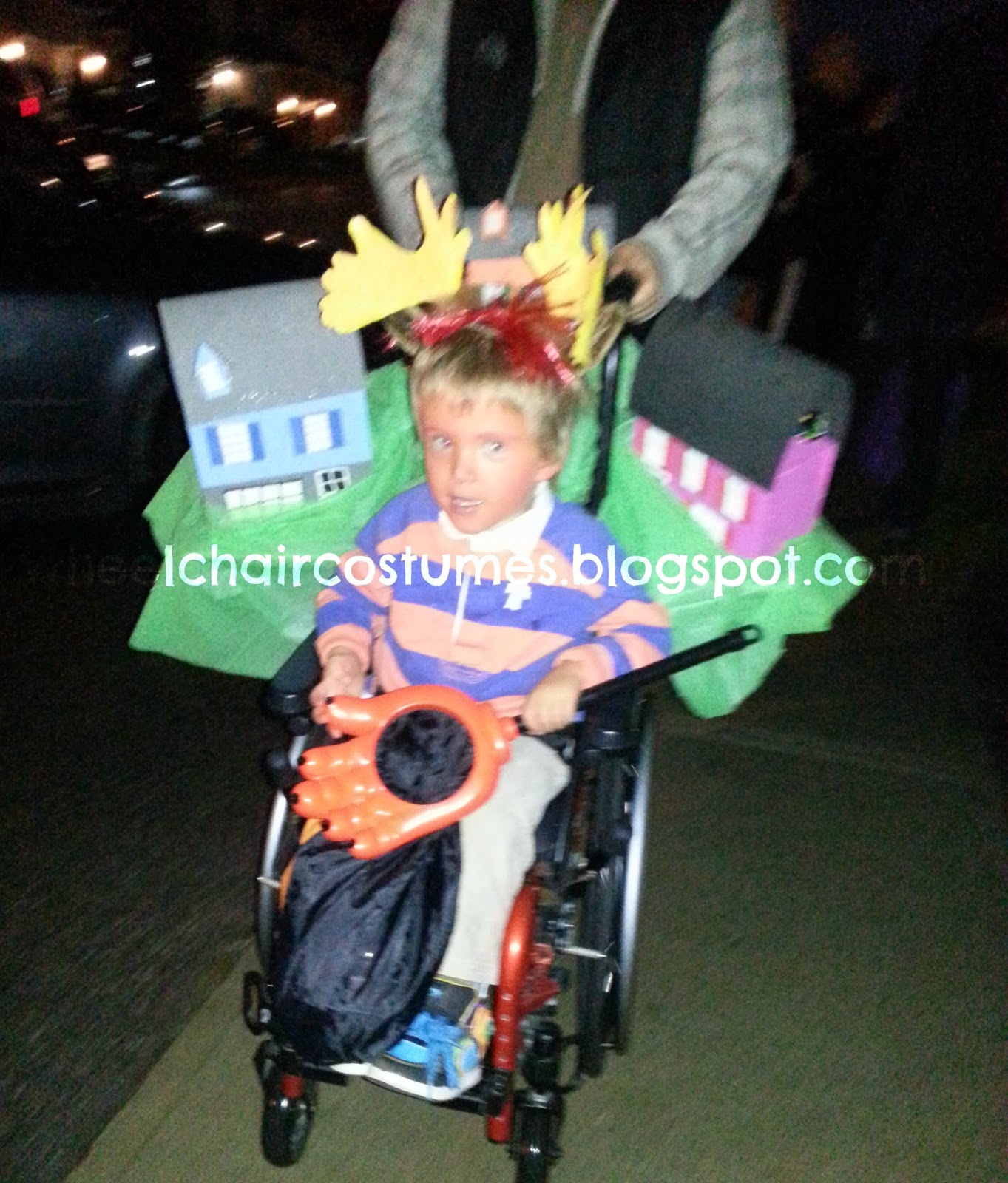 For the walker costume we did the same costume, only I wasn’t going to be making up more foam houses. I used plastic dinner plates and cut out the shapes of houses. I used permanent marker to colour the house in. The houses are held up with popsicle sticks glued together on either side and then glued to a cardboard board. I used green painter tape to hold it all in place. And covered it with a green plastic table cloth. 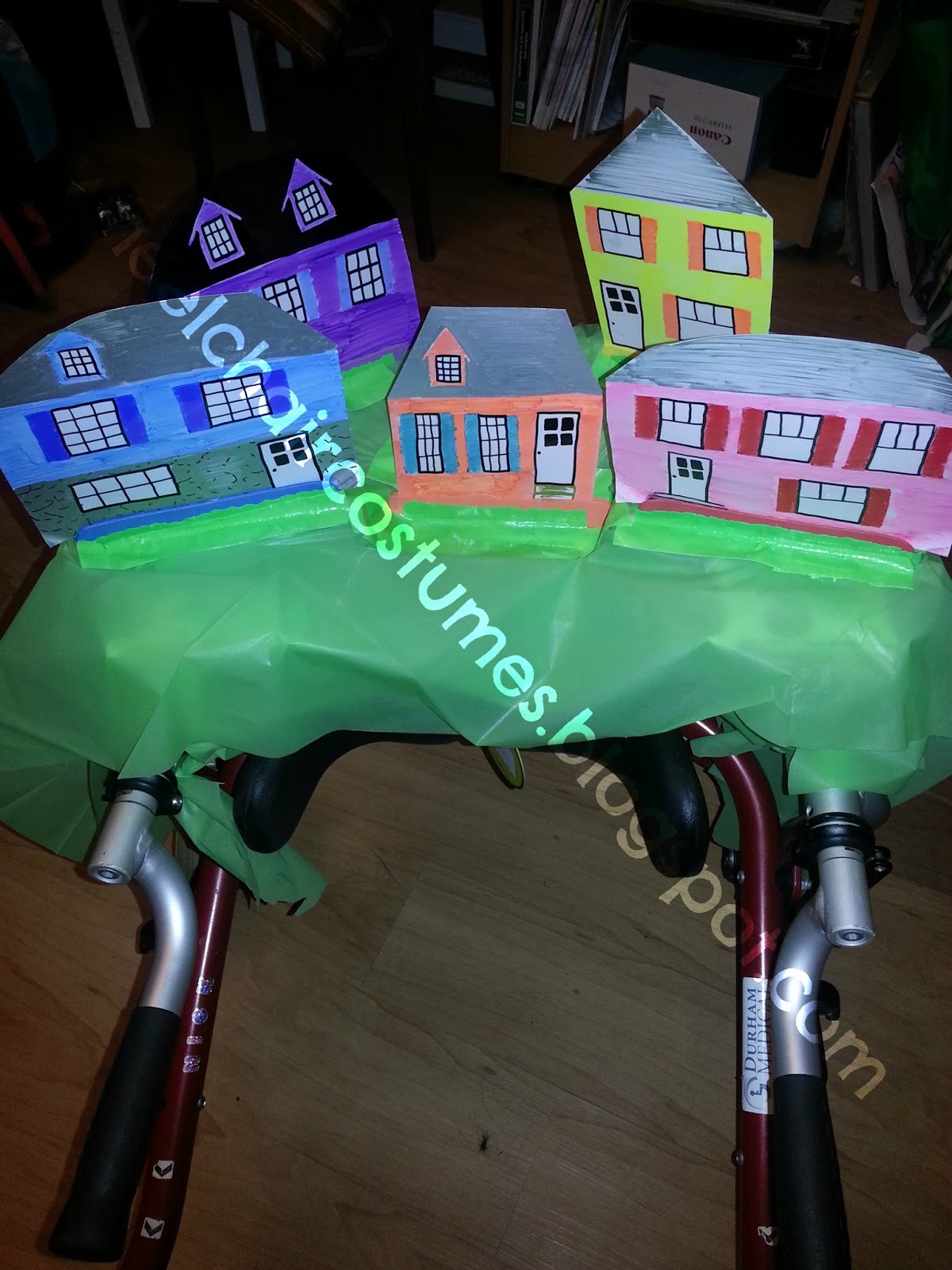 Everything was tied in place underneath the cardboard and against the back of the walker. 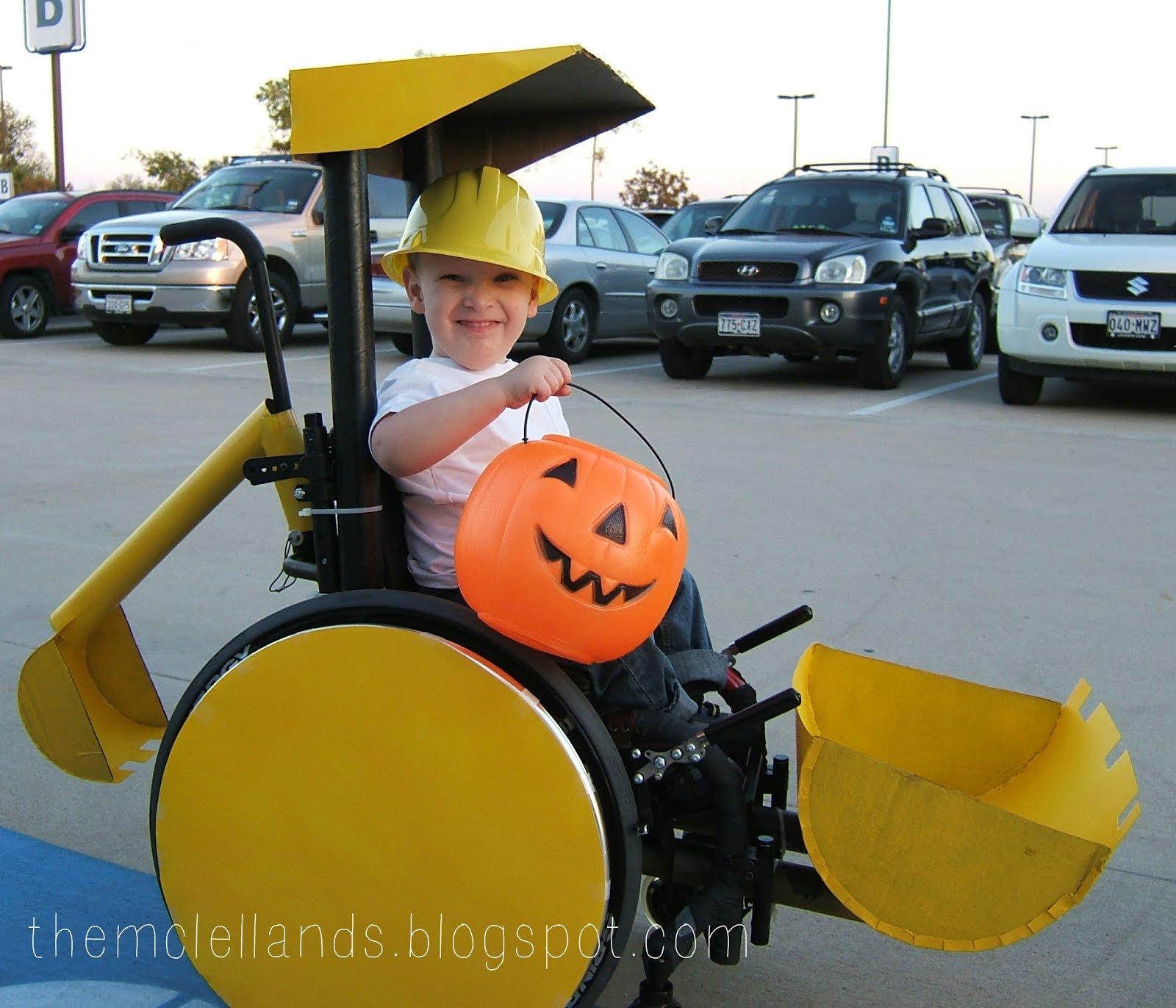 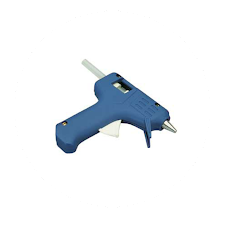